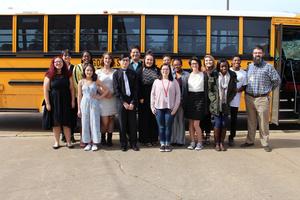 On Friday, February 7, several of the KHS choir students performed at the UIL solo
and ensemble contest in Marshall.

Brooklyn Hall and Kayla Ridge both received a superior rating
on their class 2 solos.
All of these students worked very hard to learn these pieces (most of
them in foreign languages), and deserve congratulations for their hard
earned success.